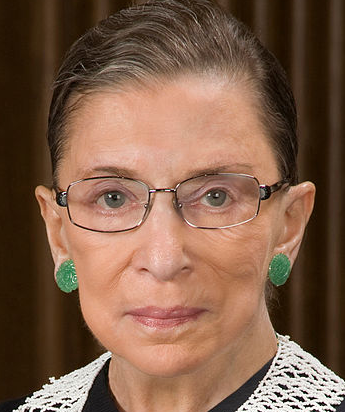 Ruth Bader Ginsburg is a U.S. Supreme Court Justice, the second woman to be appointed to the position. In 1972, she co-founded the Women’s Rights Project at the American Civil Liberties Union.

Throughout her career, Ruth Bader Ginsburg has led the drive for women’s rights in disputes over equal pay, birth control and abortion access. As one of Time Magazine’s 2015 “The 100 Most Influential People,” she’s become a symbol for her cause. In recent years, she’s become a pop-culture icon with songs, T-shirts, blogs and websites devoted to her.

The Women’s Rights Project will continue to protect the freedoms granted to women in the Fourteenth Amendment’s Equal Protection Clause for decades to come.

Ruth says, “I was a law school teacher. And that’s how I regard my role here with my colleagues, who haven’t had the experience of growing up female and don’t fully appreciate the arbitrary barriers that have been put in women’s way. Women’s rights are an essential part of the overall human rights agenda, trained on the equal dignity and ability to live in freedom all people should enjoy.”