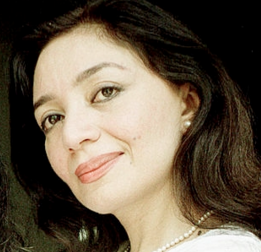 Tehmina Durrani is one of Pakistan’s most high profile women’s rights activists and successful writers. Tehmina’s controversial autobiography My Feudal Lord was published in 1991. It is now translated into 39 languages and is a European Bestseller. The book was a pioneer in surmounting the hitherto unbroken silence of Muslim women since the 14th century, reconciling the rights of women with the paramount principle laid down for them in Islam.

As an artist Tehmina’s work is fascinatingly dynamic as she brings out the true expression be it a natural scenery, an emotional reality, expression of love, fear of losing, anticipation of achieving, pain felt, desires unmet, tears unseen, spirituality experienced, mysticism unexplored, darkness sensed, embrace untouched, & all of that you can envision or not imagine. Catharsis – the first art exhibition positioned Tehmina as a grand master creating masterpieces reflecting the oppressed women. The thematic paintings depicted the society where the women are being exploited.

In 2001 Tehmina Durrani launched The Movement Ana Hadjra Labaek at the Future show 3010 in Bologna, as a futuristic mission to empower women with their Islamic Rights through the Islamic symbol of Hadjra; a peaceful transition to Islam’s Original Intention through Ijtehad.