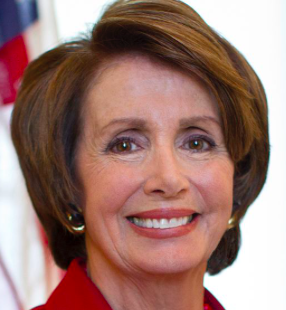 Nancy Pelosi is the Democratic Leader of the U.S. House of Representatives for the 114th Congress.  From 2007 to 2011, Pelosi served as Speaker of the House, the first woman to do so in American history.  As the Democratic Leader, she is fighting for bigger paychecks and better infrastructure for America’s middle class families.  In 2013, Nancy was inducted into the National Women’s Hall of Fame at a ceremony in Seneca Falls, the birthplace of the American women’s rights movement.

President Barack Obama called Speaker Pelosi “an extraordinary leader for the American people,” and the Christian Science Monitor wrote: “…make no mistake: Nancy Pelosi is the most powerful woman in American politics and the most powerful House Speaker since Sam Rayburn a half century ago.”

On February 7, 2018, Nancy Pelosi took the House floor today at 10:04 a.m. ET and didn’t stop speaking for eight hours and seven minutes, setting a record for the longest continuous speech in the history of the chamber. Her goal? To protect undocumented immigrants known as Dreamers. For Women’s History Month, Nancy Pelosi released the following statement, “When women succeed, American succeeds – which is why we will continue to advocate for an economic agenda for women and working families.”