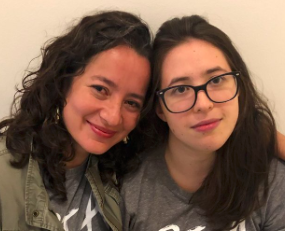 Ana Maria Archila and Maria Gallagher are the two “#ElevatorLadies” who confronted pivotal U.S. Sen. Jeff Flake after he announced he would vote to confirm Supreme Court nominee Brett Kavanaugh. They cornered Flake on an elevator, pleading with him to reconsider his support for the appeals court judge who’s been accused of sexual assault when he was a teenager.

Ana Maria Archila and Maria Gallagher confronted Arizona Sen. Jeff Flake in a Capitol elevator on Friday morning and spent nearly five minutes shouting at the Arizona lawmaker after they learned he had decided to support the US Supreme Court nomination of Judge Brett Kavanaugh. “Both of us were just enraged,” Ana Maria Archila said in an interview. ”I wanted him to be a hero.” She said she was looking for Flake to step up. A short time after the confrontation, Flake said he would not vote to confirm Kavanaugh without an FBI investigation into his past.