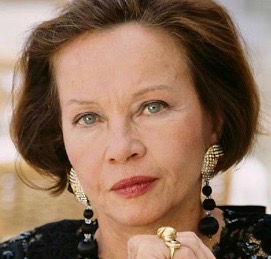 Leslie Caron is a French-American actress and dancer who appeared in 45 films between 1951 and 2003. Her autobiography, Thank Heaven, was published in 2010 in the UK and US. She was discovered by the legendary MGM star Gene Kelly during his search for a co-star in one of the finest musicals ever filmed, the Oscar-winning An American in Paris (1951). “The most magnificent thing about making An American in Paris was dancing to the music of Gershwin. I thought that was spectacular — that was grand music and learning to do modern dancing was what thrilled me the most.” Combined with her fluid dancing skills, she became one of the top foreign musical artists of the 1950s, while her triple-threat talents as a singer, dancer and actress sustained her long after musical film’s “Golden Age” had passed.

About her career, “You have no idea how shy I was. A real little mouse. I think that’s why I played little girls for so long, because I couldn’t face being a Hollywood star with all that glitter and self-assurance…”

Her bio in her own words, “Young Parisienne lives through the Occupation, dances with Petit, meets Gene Kelly, stars in Hollywood musical, world at her feet, meets film gods, decamps for London, lionized therein, meets theatre gods, three marriages, stormy affairs, children, Hollywood again, more movies, paintings, books, depression, recovery. And finally, Leslie returned to France and opened a hotel and restaurant to great success. “I need to have a big project; that is my make-up,” she explains. “I was programmed to be an achiever. My mother made it clear that just being a child wasn’t good enough. I had to be a little star. I was onstage at 14 and continued from then on, always working more than anyone else. It’s perfectly impossible for me to stop.”