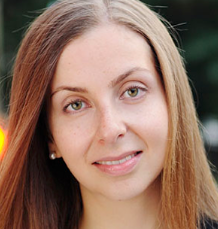 Maria Konnikova is a Russian-American writer who lives in New York City and has an A.B. in psychology and creative writing from Harvard University and a Ph.D. in psychology from Columbia University. She is the author of two New York Times bestsellers, The Confidence Game, winner of the 2016 Robert P. Balles Prize in Critical Thinking, and Mastermind: How to Think Like Sherlock Holmes, an Anthony and Agatha Award finalist. She is a contributing writer for The New Yorker and is currently working on a book about poker and the balance of skill and luck in life, The Biggest Bluff, to be published in 2019.

Having amassed over $230,000 in poker tournament earnings within one year and captured a major poker title during research for her upcoming book, in July 2018 Maria joined PokerStars Team Pro as an official ambassador. Maria’s writing has been featured in Best American Science and Nature Writing and has been translated into over twenty languages. Maria also hosts the podcast The Grift from Panoply Media, a show that explores con artists and the lives they ruin, and is currently a visiting fellow at NYU’s School of Journalism.