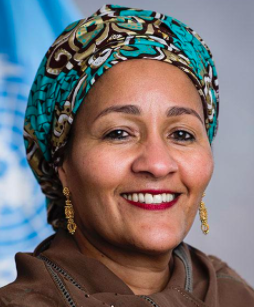 Amina J. Mohammed is a Nigerian-British diplomat and politician who is serving as the fifth Deputy Secretary-General of the United Nations. Previously, she was Nigerian Minister of Environment from 2015 to 2016. Amina has dedicated 35 years to creating a sustainable world. She began working in the private sector, developing health, education and public sector buildings, before founding the Afri-Projects Consortium for engineers and quantity surveyors. She then became an adjunct professor in development practice at Columbia University and and from 2015 she juggled her role as Nigeria’s Minister of Environment with that of Special Adviser to the U.N. Secretary General on Post-2015 Development Planning.

Amina J. Mohammed accepted the Global Citizen World Leader Prize. Having previously served three Nigerian presidents — during which she presided over a 5% national reduction in HIV infections and a 32% reduction in maternal mortality. Amina is a devoted champion of the Sustainable Development Goals to eradicate extreme poverty by 2030. She says, “My job description is simple: to build a world where every girl & boy has the tools & support to make their dreams a reality.”