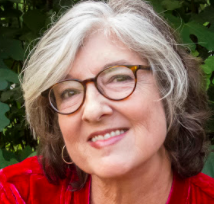 Barbara Kingsolver is a novelist, essayist and poet. She has a reputation as one of the most compelling, politically-charged authors of the last 50 years. With her many decades of writing inspired by her desire to affect change, she has become known as an activist-writer. Her worldview shifted in college after reading The Feminine Mystique and Karl Marx.

Barbara explores issues of community and different points of view on a difficult issue. In 2000, she established the Bellwether Prize to support “literature of social change”. After a life of activism and travel Barbara found much success (and a place on Oprah’s Book Club) with her 1998 novel The Poisonwood Bible, which depicts characters whose lives are impacted by the political strife of the Belgian Congo in the 1960s.

Barbara’s books have been translated into more than two-dozen languages, and have been adopted into the core literature curriculum in high schools and colleges throughout the nation. She has contributed to more than fifty literary anthologies, and her reviews and articles have appeared in most major U.S. newspapers and magazines. Barbara was named one the most important writers of the 20th Century by Writers Digest. In 2000 she received the National Humanities Medal, our country’s highest honor for service through the arts.