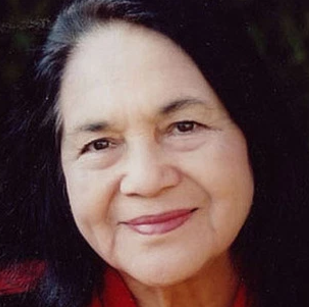 Dolores Clara Fernández Huerta is an American labor leader and civil rights activist who was the co-founder of the National Farmworkers Association, which later became the United Farm Workers. She found her calling as an organizer while serving in the leadership of the Stockton Community Service Organization (CSO). During this time she founded the Agricultural Workers Association, set up voter registration drives and pressed local governments for barrio improvements.

In 2012 President Obama bestowed Dolores with her most prestigious award, The Presidential Medal of Freedom, the highest civilian award in the United States. Upon receiving this award Dolores said, “The freedom of association means that people can come together in organization to fight for solutions to the problems they confront in their communities. The great social justice changes in our country have happened when people came together, organized, and took direct action. It is this right that sustains and nurtures our democracy today.”

At 83, Dolores Huerta continues to work tirelessly developing leaders and advocating for the working poor, women, and children. As founder and president of the Dolores Huerta Foundation, she travels across the country engaging in campaigns and influencing legislation that supports equality and defends civil rights. She often speaks to students and organizations about issues of social justice and public policy.

“Every moment is an organizing opportunity, every person a potential activist, every minute a chance to change the world.”
Dolores Huerta

“We as women should shine light on our accomplishments and not feel egotistical when we do. It’s a way to let the world know that we as women can accomplish great things!”
Dolores Huerta