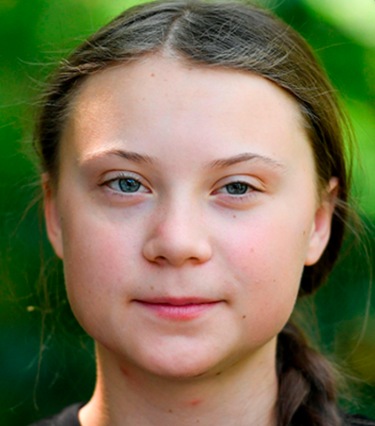 Greta Thunberg is a 17 year old Swedish climate and environmental activist. She has received worldwide recognition for her efforts to fight climate change. She was named Time magazine’s Person of the Year 2019, the youngest individual to earn the honor. Her actions have spread and influenced millions of young people all over the world to organize and protest to pressure leaders and lawmakers to act on climate change.

Greta has traveled the world, meeting with global leaders and speaking at assemblies to demand climate solutions and a recommitment to the Paris Agreement. In December 2019, she spoke at the UN Climate Change Conference in Madrid, Spain. She traveled across the Atlantic on a zero-emissions yacht, accompanied by her father and a supporting crew to speak at the UN Climate Action Summit in New York City. She went on to visit with President Barack Obama and later spoke before the House Foreign Affairs Committee and the House Select Committee in Washington D.C.

Greta is taking a year off of school to campaign for climate action and see firsthand the regions most affected by climate change.