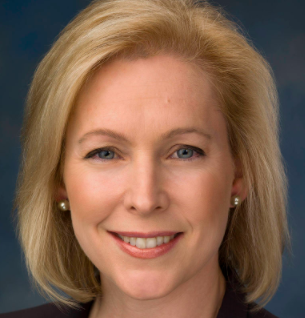 Kirsten Gillibrand has long been a champion of women. Born and raised in upstate New York, Kirsten inherited a dedication to public service from her grandmother and mother, who served tirelessly in their community. After drawing inspiration from these strong role models and others, as a young lawyer in New York City, Kirsten decided that pursuing a path of helping others was how she wanted to live her life.

Stemming from her grandmother’s influence, Kirsten has made it her life’s mission to increase women’s voices in the public debate. In 2010, after the number of women elected to Congress decreased for the first time in three decades, Kirsten launched Off the Sidelines, a call to action to encourage every woman and girl to make her voice heard on the issues they care about. Since its inception, Off the Sidelines has recruited, mentored and supported dozens of women candidates for higher office and helped elect some of the Democratic Party’s brightest rising stars.

Throughout her time in the Senate, Senator Gillibrand has been a leader in some of the toughest fights in Washington. She led the effort to repeal the “Don’t Ask Don’t Tell” policy that banned gays from serving openly in the military; she wrote the STOCK Act, which made it illegal for members of Congress to financially benefit from inside information; and she won the long fight to provide permanent health care and compensation to the 9/11 first responders and community survivors who are sick with diseases caused by the toxins at Ground Zero. Senator Gillibrand brought Democrats and Republicans together to win these legislative victories.