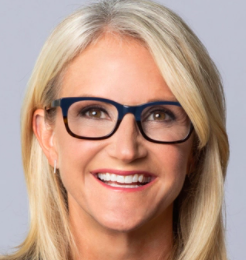 Mel Robbins is the international best-selling author of The 5 Second Rule and four #1 audiobooks on Audible. Her online courses about confidence, courage, and mindset have been taken by more than half a million students. She’s one of the most booked motivational speakers in the world and is the CEO of a media and digital learning company.

She launched a nationally syndicated daytime talk show, The Mel Robbins Show. Her social media platforms inspire more than 60 million people every month and her TEDx Talk is one of the most popular of all time, with more than 25 million views.

Mel asks, “Have you ever felt so stuck you wanted to give up? Well, that was me. One night, I was drowning my sorrows in bourbon, feeling like the world’s biggest loser, when suddenly a rocket shot across my TV screen during a commercial and it gave me a crazy idea – what if, when the alarm rang, instead of thinking, I launched myself out of bed like a rocket. The next morning, when the alarm rang, instead of laying there thinking about all my problems, I started counting. Backwards.”

She’s been teaching her method around the world and changing peoples lives. Read The 5 Second Rule. It may change yours.