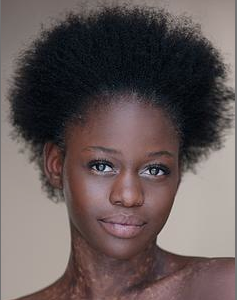 Michaela was born in war-torn Sierra Leone during the decade long civil war that took place there.  After rebels killed her father, and her mother died, her uncle left her at an orphanage.  There she was taunted and abused by the women who cared for the children because she had a skin condition called vitiligo, which made her appear spotted.  While there Michaela found a magazine stuck to the orphanage gate.  On its cover was a photograph of a beautiful ballerina en pointe.  Once she saw this, Michaela became determined to be just like that ballerina.

Soon after the discovery of the ballerina, Michaela was adopted by an American family that encouraged her to pursue her passion for ballet.  She worked hard to develop her skills so that she could overcome stereotypes of conventional beauty and racial barriers in the world of ballet. Michaela was featured in the ballet documentary, First Position. She will be returning to the Dutch National Ballet’s main company for the 2014-2015 ballet season.

Besides dancing, Michaela loves reaching out to disadvantaged young people, with whom she shares her message of hard work, perseverance, hope, and striving for a dream.  Michaela collaborated with her mother, Elaine DePrince, to write her memoir, Taking Flight: From War Orphan to Star Ballerina which was released in the fall of 2014 in the United States of America and other countries worldwide.

Michaela says, “I would love to one day start a free art school in Sierra Leone. I’d like to include the performing and visual arts in the curriculum. I feel that there are many children there whose hearts would sing and whose souls would soar if they had an opportunity to develop their artistry.”