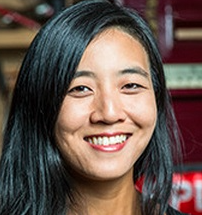 Mimi Lien is a New York-based designer of sets and environments for theater, dance, and opera. Having arrived at set design from a background in architecture, her work often focuses on the interaction between audience/environment and object/performer. Mimi is a 2015 MacArthur Fellow. The MacArthur Fellowship is a $625,000, no-strings-attached grant for individuals who have shown exceptional creativity in their work and the promise to do more.

Mimi is an artistic associate with Pig Iron Theatre Company and The Civilians, and resident designer at BalletTech. She and her husband created a performance space, Jack, in Brooklyn where experimental performance could happen.

Mimi is the recipient of numerous awards. In 2012, she received an OBIE Award for Sustained Excellence in stet design. Her word has been presented across the United States and around the world. She was a semifinalist in the Ring Award competition for opera design in Austria.