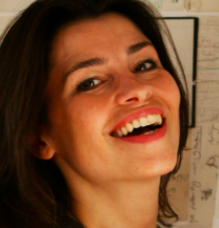 Es Devlin is an artist and designer. She is known for creating large-scale performative sculptures and environments that fuse music, language and light.She has conceived stage sculptures with Beyoncé, Billie Eilish, The Weeknd and U2 as well as two decades of opera, drama and dance worldwide.

Her practice was the subject of the Netflix documentary series Abstract: The Art of Design, and she has been named artistic director of the 2020 London Design Biennale. Es spoke at Ted2019 on sculpting music, transience and technology.

Es has been awarded the London Design Medal, three Olivier awards, a University of Kent doctorate and a UAL fellowship. She has been named RSA royal designer for industry and was made OBE in 2015.
She designed the London Olympic closing ceremony in 2012, the opening ceremony of the 2016 Rio Olympic games, and is designing the UK pavilion at Expo 2021 Dubai.