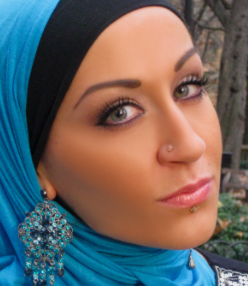 Raquel Saraswati is an activist, writer, and commentator on issues related to Islam, human rights, and international affairs. Her primary focus is ending gender-based violence and advancing reform within the Muslim community through the empowerment of women and the separation of mosque and state.

She lectures and publishes internationally on honor-based violence, forced and child marriage, the challenge of political Islam, and the role of women in transforming the Muslim world. She also mentors young women and men on matters like faith and freedom, modernity, trauma, and empowerment.

In 2007, Raquel received the prestigious Colin Higgins Youth Courage Award, granted to “those individuals who have endured overwhelming hostility and hate, yet have handled themselves with the utmost grace.” In 2010, Raquel received a Durga Award at the 6th annual San Diego IndieFest. The Durga Awards are presented annually to “outstanding women who dedicate their lives to healing communities.” Raquel is the first woman under age 30 to receive this award.