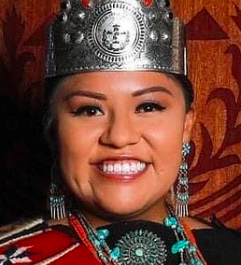 Shaandiin P. Parrish, held the title of Miss Navajo Nation 2019-2021, She has been selected as the 2021 First Things First Navajo Nation Region Champion for Young Children an award given to local champions who actively volunteer their time to raise public awareness of the importance of early childhood development and health.

To Shaandiin, participating in the pageant was about more than a title. It was about upholding a traditional way of life and giving back to a community she’d spent time away from while completing a degree at Arizona State University.
Over five days of the pageant, her traditional knowledge was put to the test with a series of rigorous competitions focused on Navajo language, culture and practices. She’d spent months preparing, making regular trips back to her family home in the Navajo Nation’s Kayenta, Arizona, to hone her skills under the watchful eye of her grandmother.

Shaandin says, “It was such an honor, but also very overwhelming. This is a title that means so much to our people — I think in that moment I felt all the responsibility of it, and the crown was suddenly very heavy.” Winners spend a year visiting over 27,000 square miles of tribal land. Because the Office of Miss Navajo Nation is a branch of the tribal government, the titleholder also serves as a goodwill ambassador, promoting community health, economic development and other initiatives. Titleholders, are responsible for visiting communities in the tribal lands in New Mexico, Colorado and Utah, making sure people feel like their concerns are being heard and they matter.