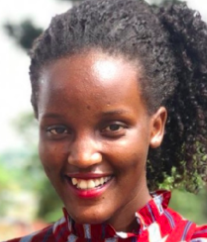 Vanessa Nakate is a climate activist from Uganda. The 24-year-old has become the latest cover for TIME Magazine’s October Issue, that’s been set aside as a Global Climate Fight Issue. She grew up in Kampala and became a celebrity in December 2018 after becoming concerned about the unusually high temperatures in her country. She was the First Fridays For Future climate activist and founder of the Rise up Climate Movement, which aims to amplify the voices of activists from Africa. Her work includes raising awareness to the danger of climate change, the causes and the impacts. She spearheaded the campaign to save Congo’s rainforest, which is facing massive deforestation. This campaign later spread to other countries from Africa to Europe.

Vanessa is also a champion for educating and empowering girls and young women—the sixth most powerful climate solution we have, according to the experts at Project Drawdown. She has just published her first book, A Bigger Picture: My Fight to Bring a New African Voice to the Climate Crisis.