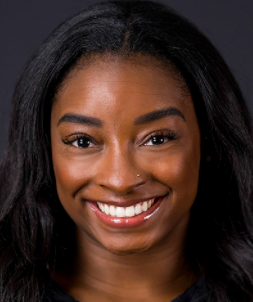 Simone Biles is a four-time Olympic gold medalist and a three-time World all-around gymnastics champion. In 2015 at the World Championships in Glasgow, Scotland, she became the only female gymnast to ever win three consecutive all-around titles. She is also the most decorated American female gymnast, with a total of nineteen medals, fourteen of them gold.

Simone, who was born in Ohio and later adopted by her grandparents in Texas, began her training at age 6. During a serendipitous day care field trip to Bannon’s Gymnastix, a coach recognized Simone’s natural talent and sent home a letter to her parents, requesting that they enroll her in a class. Simone rose quickly through the sport’s levels, and in 2011, she began her junior elite career at the American Classics in Huntsville, Texas, where she placed third all-around. Amid a few setbacks in the following two seasons, Simone rebounded in 2013 to claim the first of her three all-around World Championship titles. With her strong faith in God and her triumph against the odds, Simone is inspiring millions to dream big and follow their hearts.