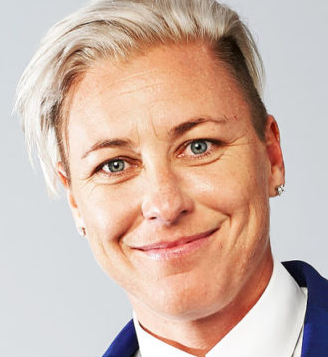 ABBY WAMBACH is a two-time Olympic gold medalist and FIFA World Cup Champion. She was the United States’ leading scorer in the 2007 and 2011 Women’s World Cup tournaments and the 2004 and 2012 Olympics. An activist for equality and inclusion, Abby is the author of the New York Times bestseller Forward: A Memoir and the forthcoming WOLFPACK. She is co-founder of Wolfpack Endeavor, which is revolutionizing leadership development for women in the workplace and beyond through her champion mindset, individualized coaching, and team-bound focus.

Abby helped bring her team to Olympic gold, and now she wants to help all women score big with her new book, Wolfpack. She says, “I think that there’s never been a more important moment for women in this country. I think that what women need more than anything is their individual power and to tap into the collective power of all women. Every woman has their inner wolf and my belief — my dream — and what I’ve become obsessed with is that every woman find and unleash their wolf so they can unite their pack. If we keep playing by the Old Rules, we will never change the game. Welcome to the New Rules.”