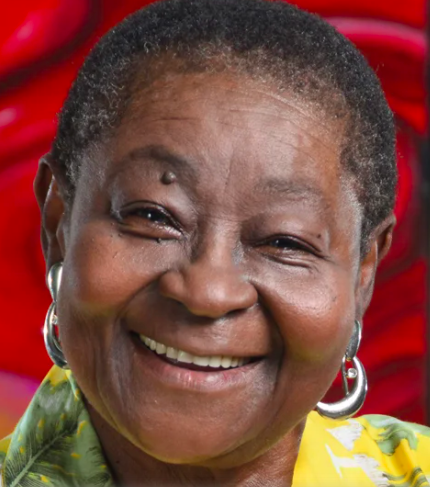 Calypso Rose is a Trinidadian calypsonian. She started writing songs at the age of 13. Over the years, she has composed more than 1000 songs and recorded more than 20 albums. Considered the “mother of calypso”, Rose was the first female calypso star and her lyrics frequently address social issues like racism and sexism. Rose has been an unwavering proponent in expressing the female perspective on such issues as domestic abuse and spousal infidelity.

For generations of her core Caribbean fans, Calypso Rose has been a long-time champion of a woman’s right to let loose, party and, most importantly, do so free from the leering gaze and pawing hands of men. Her witty lyrics speak to the plight of Caribbean women living in a male-dominated society. Her hit song, “Leave Me Alone,” became the breakaway hit of Trinidad’s 2017 Carnival season. All the women went wild, but more than just a party anthem, the song’s message of female empowerment spawned a grassroots activist campaign speaking out against violence toward women in the Caribbean and beyond.

In 1978, she became the first woman to win Trinidad’s calypso competition. In fact, Rose went on to win so many of the prestigious “Calypso King” competition titles that they renamed it the gender-neutral “Calypso Monarch” in her honor.

“All I went through opened the door for the female calypsonians because I was the only woman in it for years.”