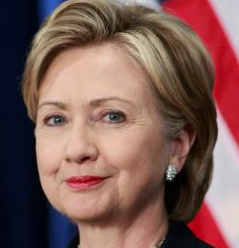 Hillary Clinton accepted the Democratic party’s presidential nomination Thursday night Jul 28, 2016 in Philadelphia, making history as the first woman to be chosen to run for the highest office in the land by a major party in the United States.

“Today, we’ve reached a milestone in our nation’s march toward a more perfect union: The first time that a major party has nominated a woman for President,” Clinton said. “Standing here as my mother’s daughter’s, and my daughter’s mother, I’m so happy this day has come.”

“Happy for grandmothers and little girls and everyone in between. Happy for boys and men, too, because when any barrier falls in America, for anyone, it clears the way for everyone,” she continued. “When there are no ceilings, the sky’s the limit.”

Hillary made advancing the status of women and girls around the world a core part of U.S. foreign policy, working to bring down the barriers that stop women and girls from reaching their potential. She stood up against sex trafficking, expanded opportunities for women and girls in education and business, and led the fight for a U.N. Security Council resolution to combat sexual violence against women and children in conflict zones.

Hillary Clinton has served as secretary of state, U.S. senator from New York, first lady of the United States, first lady of Arkansas, a practicing lawyer and law professor and an activist.