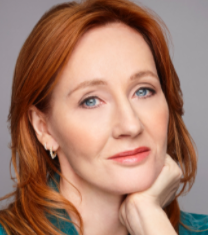 J.K. Rowling is best-known as the author of the bestselling Harry Potter series of seven books, published between 1997 and 2007. The popular adventures of Harry, Ron and Hermione have gone on to sell over 500 million copies worldwide, be translated into over 80 languages, and made into eight blockbuster films. She is the second highest-paid author in the world.

J.K. wanted to be a writer from an early age. She wrote her first book at the age of six – a story about a rabbit, called ‘Rabbit’. At just eleven, she wrote her first novel – about seven cursed diamonds and the people who owned them. She conceived the idea of Harry Potter in 1990 while sitting on a delayed train from Manchester to London King’s Cross. Over the next five years, she began to map out all seven books of the series. She wrote mostly in longhand and gradually built up a mass of notes, many of which were scribbled on odd scraps of paper. Also in 2012, J.K. Rowling published her first novel for adults, The Casual Vacancy (Little, Brown), which has now been translated into 44 languages and was adapted for TV by the BBC in 2015.