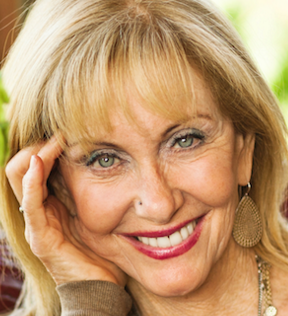 Joan launched Gymboree 40 years ago at a community center to allow moms and dads to assemble while their toddlers played. Gymboree flourished and became an iconic billion dollar international brand. With the successes and stresses of this business, an eating disorder emerged. She had to depart from Gymboree and enter into a long-term treatment center, spending the next few years on a successful healing journey.

Returning home after 3 years away, Joan took her first yoga class and was transformed. She became a devoted practitioner, bought the business, and opened two new locations. Eventually realizing that her own yoga practice was suffering, she sold the business.

Joan’s understanding of entrepreneurialism and life balance issues makes her a sought after speaker. Her memoir Play it Forward: From Gymboree to the Yoga Mat and Beyond offers wisdom and inspiration. Joan says: “Never, ever, stop believing in yourself….Dream big, take risks for what you believe in, and doggedly pursue your vision and goals. Treat setbacks (or, if you must, “failures”), as springboards for the next success.”