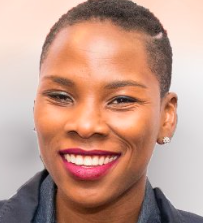 Luvvie Ajayi is a New York Times best-selling author, speaker and digital strategist who thrives at the intersection of comedy, technology and activism.
A fourteen-year blogging veteran, she is the voice behind Awesomely Luvvie, a widely-respected humor blog that covers everything pop culture – from TV, movies and technology to travel, race and life’s random adventures.

It was her blog that inspired Luvvie’s debut book, I’M JUDGING YOU: The Do-Better Manual, which was released in September 2016, and instantly hit the New York Times best-seller’s list. It is a collection of essays that critiques our fame-obsessed, social media-centric lives, while encouraging us to do better. The book is the good, yet snarky, angel on your shoulder, in word form. I’M JUDGING YOU has been optioned by Shondaland to be turned into a cable series.

The drive to leave the world better than she found it is the foundation of her work with The Red Pump Project. In 2009, she partnered with Karyn Brianne Lee to create The Red Pump Project, a nonprofit that raises awareness about the impact of HIV/AIDS on women and girls. As Executive Director, she leads the national executive team and network of ambassadors in four states.