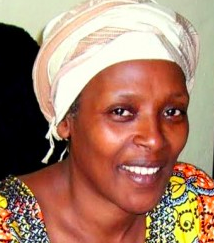 Neema Namadamu is a visionary game-changer. From a young age, she refused to accept the limitations imposed on her by society. Disabled by polio at age two, her prospects in life were considered nonexistent by many. But thanks to her mother’s dedication, and Neema’s own determination, she managed to surmount great obstacles to complete her education. In high school she began hosting a radio show advocating for the rights of children with disabilities.

Neema became the first woman with a disability from her ethnic group to earn a university degree, going on to serve in Parliament for South Kivu province, and then as Chief Advisor to DRC’s Minister of Gender and Family. Upon leaving government service, Neema’s frustration with the lack of impact she had been able to make through official channels led her to become active in Civil Society. The first organization she founded, in 2007, was an NGO to support disabled survivors of sexual violence in eastern Congo. Maman Shujaa means “Hero Women” in Swahili.