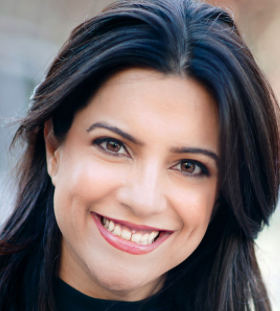 Reshma Saujani is the Founder and CEO of Girls Who Code, a national non-profit organization working to close the gender gap in technology. Through its Summer Immersion Programs and Clubs, Girls Who Code is leading the movement to inspire, educate, and equip young women with the computing skills to pursue 21st century opportunities.

Reshma began her career as an attorney and activist. In 2010, she surged onto the political scene as the first Indian American woman to run for U.S. Congress. During the race, Reshma visited local schools and saw the gender gap in computing classes firsthand, which led her to start Girls Who Code. Reshma has also served as Deputy Public Advocate for New York City and ran a spirited campaign for Public Advocate in 2013.

Reshma’s TED talk, “Teach girls, bravery not perfection”, has more than three million views and has sparked a national conversation about how we’re raising our girls. She is the author of two books, Girls Who Code: Learn to Code and Change the World, the first in a 13-book series about girls and coding, and Women Who Don’t Wait In Line, in which she advocates for a new model of female leadership focused on embracing risk and failure, promoting mentorship and sponsorship, and boldly charting your own course — personally and professionally.