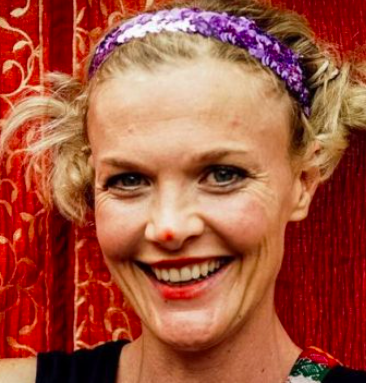 Samantha Holdsworth, from London, is the founder and director of Clowns Without Borders, an international arts-led charity that provides psychosocial support for children living in crisis. Most recently, they’ve shared performances with nearly 6,000 refugee children from the Rohingya community in Bangladesh. She originally trained as a theatre director and clown and co-founded Nimble Fish in 2007, an award-winning cultural producing organization that has delivered over thirty projects across all creative genres, working with hundreds of artists and thousands of community members. This work has also taken her around the world. “I’ve worked with educators in South Korea, Brazil, Lithuania, Taiwan, young offenders in Brazil and as part of the British Council’s Creative Entrepreneurs scheme, I was also the first person to develop an integrated youth arts program with young people affected by leprosy in India.”

“My one constant has been a strong belief in the potential as the arts to act as a catalyst for social change. I’m lucky; both my parents are entrepreneurs so I’ve never been afraid of starting my own thing. Never in my wildest dreams however, did I think I’d end up running an international humanitarian charity.”

“It’s going to be a busy year for the clowns. We’ve just come back from Bangladesh where we shared laughter with thousands of refugee children from the Rohingya community. We had the responsibility (and privilege) of reminding the children we meet there, that it’s OK to be a child; that laughter and play was possible for them. Given the scale of the tragedy we are already fundraising to ensure we can make several visits there this year. We also have a tour to the Zaatari Refugee camp in Jordan lined up for April. One of the things the children ask us the most is “When are you coming back?” and so we’ll also be making our fourth visit to children in the refugee camps in Greece.”