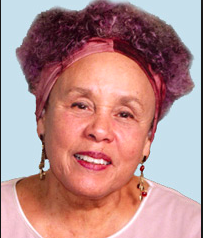 Betye Saar is an American artist known for her work in the medium of assemblage. She is also a visual storyteller and an accomplished printmaker. Betye has spent more than five decades creating incisive and poignant works of art that critique all forms of racism, sexism and oppression while simultaneously pointing toward a curiosity and a beauty that transcend the artificial categories that divide people. She has gained international notoriety for her work in printmaking, collage, assemblage and installation art.

“As a mother of three I couldn’t participate directly in the Civil Rights movement, so I used my art to contribute to the movement.” Influenced by the assassination of Dr. Martin Luther King, Jr. and the Civil Rights movement Betye created her break though work, The Liberation of Aunt Jemima. In this piece, she used the image of Aunt Jemima, the figure of an African American woman which had long-been exploited in the selling of various products, to address derogatory images of black women. She reversed this stereotype by juxtaposing the traditional image with objects of empowerment.

Over the last three decades Betye’s work has focused on remembering the past, breaking down social stereotypes, countering the myriad forms of oppression, delving deeper into mysticism and ritual and synthesizing cross cultural symbols.  “There has been an apparent thread in my art that weaves from early prints of the 1960’s through later collages and assemblages and ties into the current installations. That thread is a curiosity about the mystical.”

Betye has won many awards for her artwork throughout her career. She has received two National Endowment for the Arts Awards. She also received the Artist Award from the Studio Museum in Harlem in 1990, as well as the Distinguished Artist Award from Fresno Art Museum in 1993. In 2008, she was recognized for her career in art and community activism and was awarded the Lifetime Achievement Award in Fine Arts from the Congressional Black Caucus.