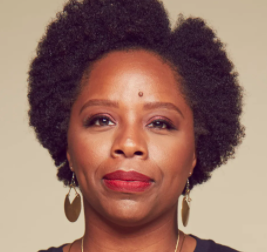 Patrisse Cullors is an artist, organizer, and freedom fighter from Los Angeles, CA. Cofounder of Black Lives Matter and founder of Dignity and Power Now, she is also a performance artist, popular public speaker, and a New York Times bestselling author. She’s received many awards for activism and movement building.

In the summer of 2013 fueled by the acquittal granted to George Zimmerman after his murder of Trayvon Martin, Patrisse co-founded a global movement with a hashtag. Black Lives Matter has since grown to an international organization with dozens of chapters and thousands of determined activists fighting anti-Black racism worldwide. She was named by the Los Angeles Times as a Civil Rights Leader for the 21st Century and the Sydney Peace Prize for her work with Black Lives Matter. Patrisse recently completed an international tour for her new book When They Call You a Terrorist: A Black Lives Matter Memoir.