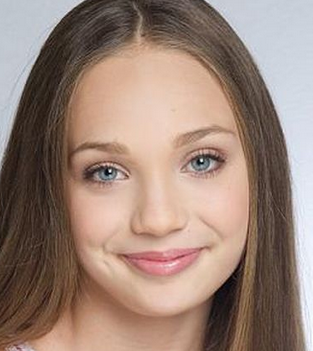 Maddie is an American child dancer, actress and model. She is best known for appearing in six seasons of Lifetime’s reality show Dance Moms and for starring in Sia’s music video “Chandelier.” Her strongest styles of dance are tap and lyrical dance.

Some of Maddie’s TV guest appearances include “Dancing With The Stars”, “The Ellen DeGeneres Show,” “Jimmy Kimmel Live” and “Saturday Night Live”. In early 2015, Maddie had the honor of performing at the GRAMMY Awards. In 2016, Maddie won a People’s Choice Award.

Maddie will be joining FOX’s So You Think You Can Dance Season 13 as a judge in May, and her first animated film “Ballerina” will be released early 2017 worldwide.

Maddie says, “I don’t want to wait until I’m older—I want to do everything now!” My schedule is very hectic, and it might be a little stressful sometimes, but I have so many fun things happening every day.”