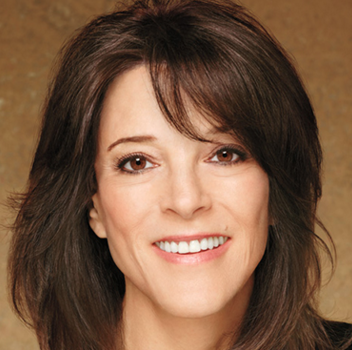 Marianne Williamson is an internationally acclaimed spiritual teacher, author, and lecturer. She has been a popular guest on television programs such as Oprah, Larry King Live, Good Morning America, Charlie Rose & Bill Maher.

Six of her eleven published books have been New York Times Best Sellers. Four of these have been #1. The mega best seller A Return to Love is considered a must-read of The New Spirituality. A paragraph from that book, beginning “Our deepest fear is not that we are inadequate. Our deepest fear is that we are powerful beyond measure…” is considered an anthem for a contemporary generation of seekers.

Marianne is a native of Houston, Texas. In 1989, she founded Project Angel Food, a meals-on-wheels program that serves homebound people with AIDS in the Los Angeles area. To date, Project Angel Food has served over 10 million meals.  Marianne also co-founded the Peace Alliance. And she serves on the Board of Directors of the RESULTS organization, working to end the worst ravages of hunger and poverty throughout the world.