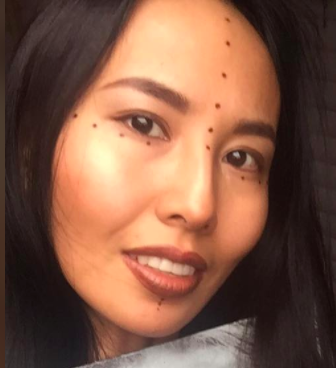 Zarina Kopyrina was born in small remote village of 900 people, far from capital of Republic of Sakha (Yakutia) – Yakutsk city (Arctic Siberia). “As a young child I spent a great deal of time in the wild, learning to talk with animals and birds.” Growing up with her mother, three sisters and her grandparents, she was introduced to the magic of music and sound at a young age. As the oldest daughter, she naturally accepted a leadership role among her sisters. “I was taught traditional songs when I was three years old and was asked many times to sing for my people during ceremonies. When I came of age, I received permission from spirits through Tungus Siberian shaman to play shamanic drum and sing sacred songs. Since that time my life has completely changed and the shamanic music has taken me all over the globe in Europe, Asia, Africa, South America and now here in this country”.

Zarina, along with her partner, is the founder of Olox Arctic Siberian music project. Part of OLOX’s unique style involves Zarina recreating the sounds of the wind, birds, and other animals using her voice. She has said she used to go into the forest and talk to animals, particularly birds. She says she falls into a “trance” and imagines herself as an animal in order to “talk to them.” “Every single step we do has an impact to plants, trees, animals, insects, drop of water. We are part of the Great Consciousness and it is our responsibility to do not harm Mother Nature!”