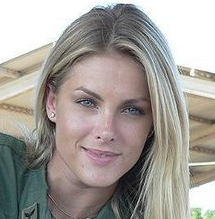 Julie is an Assistant Professor of Aviation Science at the Florida Institute of Technology. She’s flown the F-16 “Viper” in various assignments around the world and has been an Instructor Pilot with over 1500 hours of jet time. Julie was assigned to the US Air Force Aggressors, where she instructed fighter pilots across the Air Force. Julie continues to fly F-16’s in the US Air Force Reserves.

She’s followed her vision since childhood. “Many kids end up following in their parents’ career paths because they have been exposed to it and they know the steps to follow in order to pursue that path. My father flew F-106s in the Air National Guard and was also a pilot for United Airlines. So I grew up talking to my dad about airplanes. When I was 5 or 6, I’d ask him, “Dad, how does an airplane fly?” I’m still surprised at the number of people who don’t realize women are flying fighter aircraft since the 1980s (in combat since the early 90s)!”

Her advice for women interested in a career in military and/or civilian aviation, “Follow your heart, work hard and don’t give up!”

She says the most beautiful sight she’s seen from the cockpit of her F-16 is, “Sunrises from 30,000 feet. There’s got to be some reward for waking up that early.”